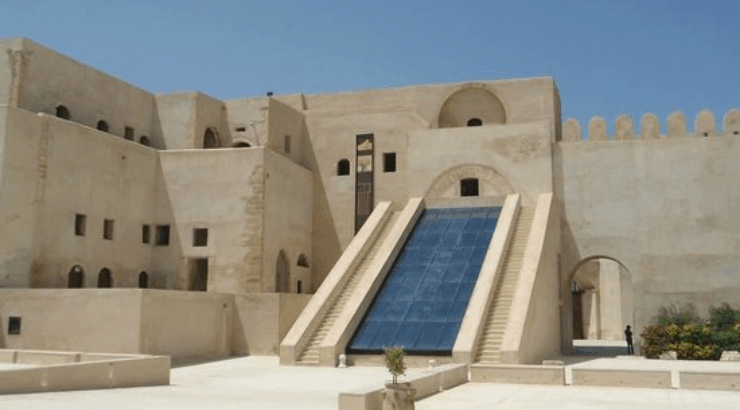 The Sousse Archaeological Museum is an archaeological museum located in Sousse, Sousse Governorate, Tunisia. The museum is housed in the Kasbah of Sousse's Medina, which was founded in the 11th century AD. It was established in 1951. The museum reopened its doors to the public in 2012, after the collections were rearranged and the edifice was renovated. It contains the second largest collection of mosaics in the world after that of the Bardo National Museum in the capital Tunis.

Some votive stelae and urns displayed in the punic room date from as early as the 7th century BC. Artefacts dating from the antiquity up to the 2nd century BC were discovered by French archeologist Pierre Cintas in the Tophet of Sousse and in the Sanctuary of Baal Hammon. In addition, it contains some gorgeous mosaics depicting mythological figures, such as the "Head of Medusa", Face of Oceanus, Neptune on his sea-chariot, or Nilotic scene to name but a few. A baptismal font, covered with mosaics and found at Bqalta, is on display alongside some Christian themed decorative terracotta tablets. The museum also exhibits some marbel statues from the Roman epoch such as the bust of emperor Hadrian and the statue of Roman fertility and manhood god Periapus with his sizeable phallus... Some funerary artifacts are also part of the collection, they were discovered at Hadrumetum (Roman Sousse)'s catacombs as well as the Catacomb of Good Shepherd, and the Catacomb of Hermes... The museum of African Modern Art also features some local pottery from Greece found within the Punic tombs at El-Kasabah: oil lamps, and some marble funerary epitaphs engraved in Greek and Latin languages, and among these epitaphs can be found the famous marble tablet engraved with the figure of the "Good Shepherd" after which the place of the discovery was named.