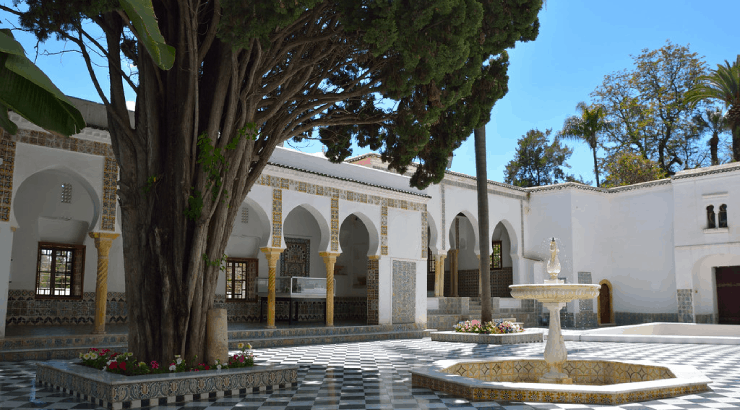 The Musee National du Bardo or Bardo National Museum of Prehistory and Ethnography El-mathaf El-ouatani Bardo, French: Musée National de Préhistoire et d'Ethnographie du Bardo) is a national African Art museum located in Algiers, Algeria. The edifice is a former Moorish villa. It was opened as a museum in 1927. Nothing specific is known about this residence, formerly in the countryside and now encompassed in the modern city. H. Klein tells us that the palace was built in the eighteenth century and that it would have been the property of Prince Omar before the French conquest. A document, in the form of a drawing signed by Captain Longuemare, specifies that it was Mustapha ben Omar who was a very rich Tunisian. In 1926, the Bardo Palace was ceded to the Domains by Mrs Frémont, sister and heiress of Pierre Joret.

Since 2004, a computer-based inventory programme was initiated based on the “Virgil” database provided by the Museographic Development Division (I.N.P.). The digitization of the glass-plate negatives collection which constitutes the main proof of the museum’s history and the state of Tunisia’s cultural sites is nearing completion.
During this historical phase of the museum, a partnership with the Louvre museum was concluded for the period between 2009 and 2014. It concerns the restoration and the presentation of the Roman sculptures collection of the Bardo museum. This agreement provides for the exchange of exhibitions between the two institutions.
Exhibitions entitled "Memory à la carte" and "Amber Magic" were presented to the public on the occasion of the commemoration of the 120th anniversary of the Bardo national museum in May 2008. Collections of the national Bardo museum of African art travelled to Karlsruhe (Germany) within the following exhibitions: "Hannibal ad portas" in 2004, "About Sejnane, a country of a millenary tradition" in 2005, and "About the Vandal heirs of the Empire" in 2009. The collections were also exposed in Los Angeles within the exhibition "Stories in Stone, conserving mosaics of Roman Africa" in 2006 and in the Arab World Institute in Paris within the exhibitions entitled "The Phoenicians and the Mediterranean" in 2007 and "Lights from Kairouan" in 2009.