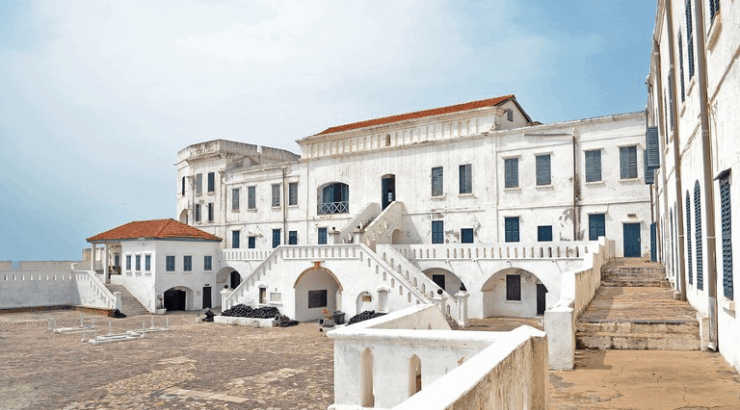 The Cape Coast Castle Museum is an ethnography and archeological museum located in Cape Coast, Ghana. It was established in 1974.

The Cape Coast Castle Museum of African Art is housed in one of the wings of Cape Coast Castle, in the Central Region. Established in 1970, the museum was given a face-lift in 1994 by the GMMB, with funds from the UNDP,  USAID, the Smithsonian Institution  and Counterpart funding from the Government of Ghana, along with support from other NGOs.

The Cape Coast Castle Museum of African Art aims to educate its visitors about  the advent of Europeans to Africa and their interactions with the local communities and the Central Region in general. Visitors can view maps of slave trade routes and look at examples of the objects which were traded in for slaves – such as glass beads, whisky bottles, and firearms. Representations of the hold of a ship, as well as auction blocks, have been constructed to simulate for guests a tiny part of the experience of the enslaved. The museum also includes exhibits on the pre-colonial history of the Central Region, in addition to displays on its contemporary culture. Visitors can view a video documentary on “Cross  Roads of Trade, Cross Roads of People” putting into context the interactions between the Africans at Home and those in the Diaspora.

The Cape Coast Castle Museum’s facilities include conference halls; a library; an art and craft studio; a book store and gift shop; curio shops, a car park; and an open courtyard for outdoor activities.  The Cape Coast Castle also hosts the Building History Museum of African Art. There is also a 45-minute guided tour, which allows visitors to view the castle’s dungeons, the condemned cell and the “Door of No Return”.