You are renowned as one of the most influential African artists in the world. Does this surprise you?

Yes, it does surprise me. (Laughs) I live in a very simple village, nothing glamorous or extraordinary. I think that probably makes for little distraction, so I can concentrate on my work more than if I were living in a busy metropolitan setting. When my works are shown in cities like New York I am surprised to see people are able to deeply relate to them but at the same time it is gratifying to see that others in different circumstances and locations are able to connect and make meaning of one’s little efforts.

Would you say that African art is making an impact on the international contemporary art market?

Yes, I should say it’s receiving attention again. I’ve been watching the trends over the years. There was an interest in the 1970’s in contemporary art from Africa but it subsided in the 80’s. It was resurrected again in the 1990’s. Now cultural production is receiving more critical attention in Africa as well as abroad. I think its impact on the international art scene and eventually, the market is accumulating. 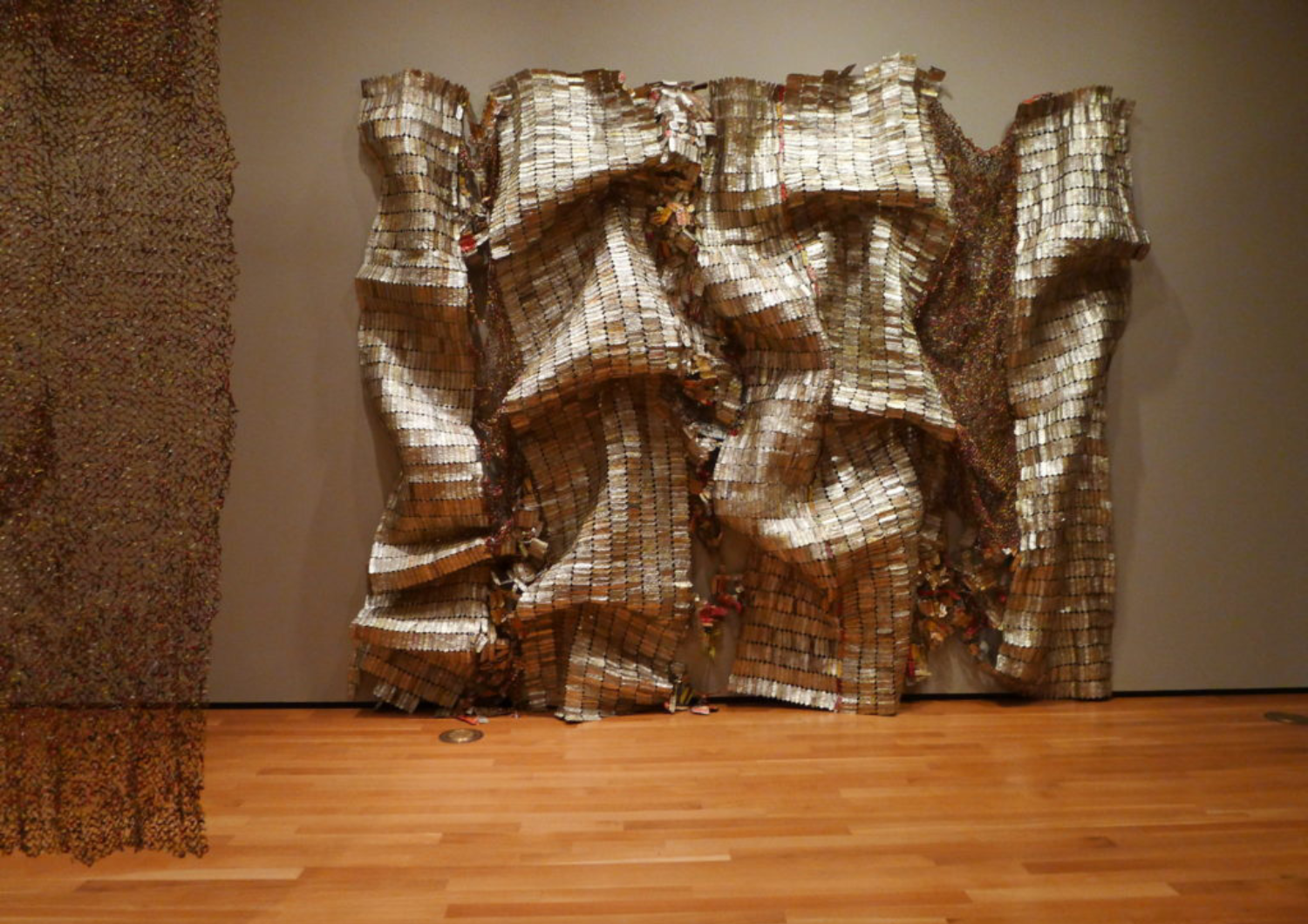 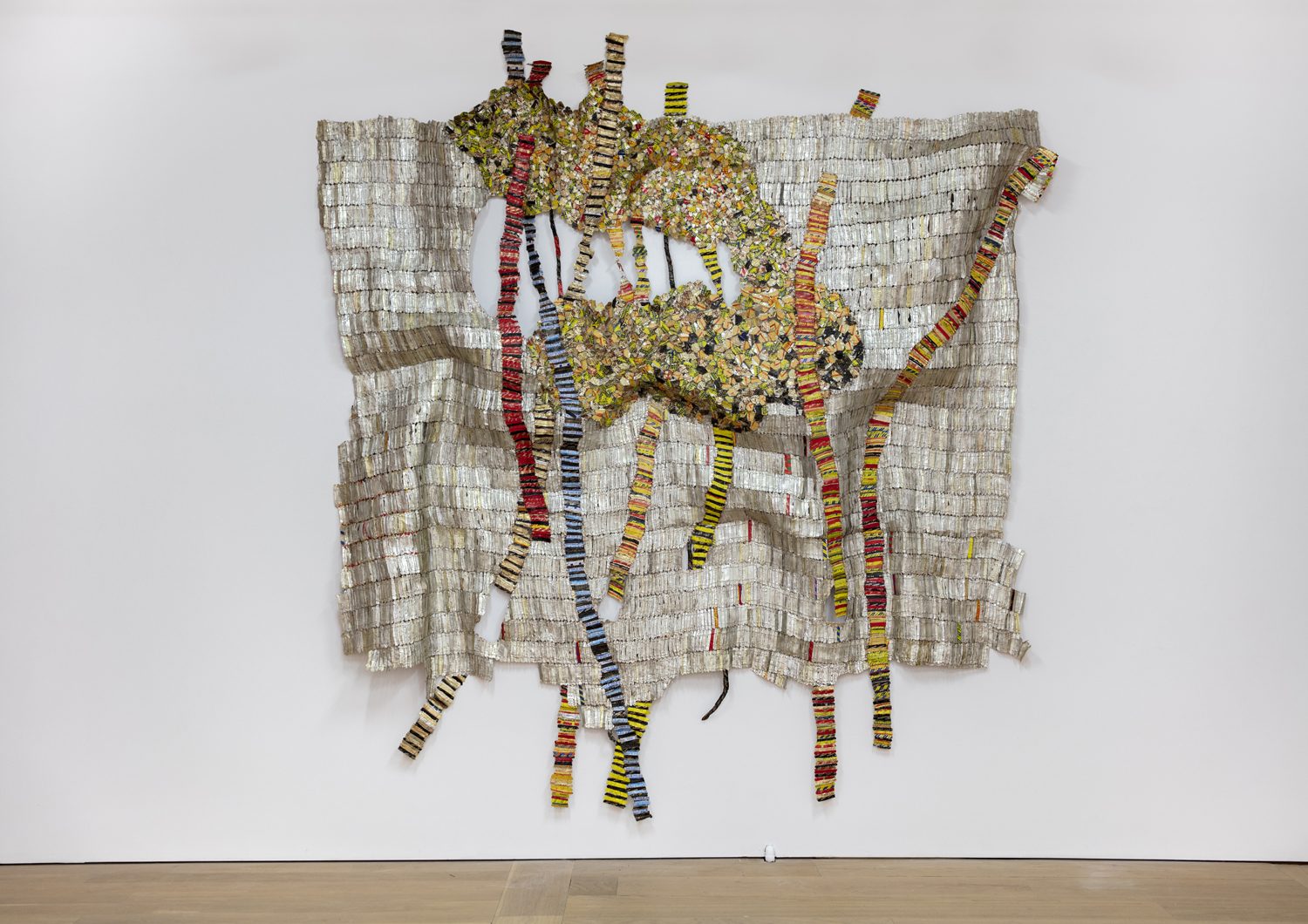 Where do you originally come from?

I was born in the colonial Gold Coast in 1944, which became Ghana. I saw a transition period between the end of the Colonial era and the beginning of independence. I can remember that with our independence came feelings of nationalism. People proclaimed they were citizens of a country, not of a colony. We were trying to review what existed before colonialism in order to see what could still be used to foster a whole new society.

What were your parents doing at that time?

I lost my mother when I was a baby and grew up with an uncle who was a protestant church reverend. My father was a head fisherman as well as a master weaver. I remember he presented one of the Kente he wove to me when I was going to the university.

Did your family teach you how to weave?

Because I did not live with my father, I was not exposed to it. But most of my brothers who grew up at home are able to weave. I consider my current sculptural work to have several attributes of fabric, but I am not interested in textiles. Even when we were introduced to them in art school textiles did not attract me at all.

How did the opportunity for you to attend a university arise?

In those days universities would go around looking for prospective students by sending out teams to the secondary schools, to talk about the courses they offer and their prospects. In secondary school I did well in several subjects, but the most consistent one was art, so when the team visited our school several of us completed the admission forms. I chose fine art, which the school’s guidance team thought was apt. At that time being an artist wasn’t an attractive choice because there were no visible role models like you have in architecture, engineering, pharmacy, etc. I didn’t know anyone who was a professional artist or exactly what it meant to be one. So, it was a really risky decision for me to choose this field based on the feeling it was something I would truly enjoy doing.

Which University did you attend?

I worked for a bachelor’s degree in sculpture and a postgraduate diploma in art education at the University of Science and Technology in Kumasi, Ghana. After that I taught for about five years at the Specialist Training College, (now the University of Education) Winneba, which is about an hour ‘s drive from Accra westwards on the coast of Ghana.

While you were attending college were there any professors who influenced the building of your career?

In sculpture, we started with Von Stokar, who is German, and finished with the Ghanaian, Azii Akator. They would give us a challenge at a time and leave us to grapple with it, which with hindsight I think was very helpful. It was good because we had to search for our own paths. Because we had to discover what to do ourselves, the solution became a part of us.In drawing, I took courses from a British professor named Armistead, whose approach was almost scientific. He methodically took us through exercises in how to make visual judgments. He taught us how to see. The two approaches do come in here and there in the way I work.

You left Ghana to teach at the University of Nigeria. What made you decide to move to another country?

Well, a lot of things, among them I wouldn’t leave out adventure. I was very young then and I wanted to explore, to broaden my horizon. So I took the opportunity to apply at the University of Nigeria and after a year I received an appointment with them. Luckily when I got there I met one of the prominent African artists that I had read about in the few books on modern art in Africa that exited at that time. His name is Uche Okeke and he happened to be heading the department of fine arts. We had a great time getting to know each other and we learned from each other; probably more of me from him than him from me… (Laughs) We would talk about art until 2 or 3 in the morning. There were very talented and inspiring faculty in the department as well, like Obiora Udechukwu a painter and poet with whom one shared ideas and Chike Aniakor, an art historian and painter. The company was one that made for growth.

At what point were you able to survive financially as an artist?

About two years after finishing art school in Ghana. While teaching at Winneba, I began to work with wooden trays that are used in the markets to display wares. I would burn graphic signs onto each of them that had a saying or message associated. I tried to locate each within a border designed to enhance the meaning and message. People could relate to both the trays and the signs so they were eagerly collected at our exhibitions. That was the first point that I saw my work having the capacity to generate financial rewards. Ironically, I was generating more income this way than with my regular employment, which occupied most of my time. My students were assisting me on weekends and during holidays I would have several young relatives, boys in secondary school, work with me. Their efforts helped generate enough funds that I was easily able to pay for their school fees and also give them good pocket money to go back with!

Were you exhibiting in commercial galleries at that point?

I appeared in group-shows in Ghana at venues like the National Art Centre until 1975. Afterwards I exhibited in Nigeria at cultural centers. The British, Italian and French cultural institutes were outfits that provided opportunities for artist to exhibit at in the 1970’s and 1980’s.

Did you ever have to approach commercial galleries?

During my earlier visits to New York in the 1980’s, I did go to a couple of galleries, which mostly told me they were scheduled for next two to three years. Ordinarily they kept my slides for future attention but I guess at the time they did not see any commercial prospect in the works. I then decided to just focus on the practice and forget about galleries. I began showing in museums and other non-commercial spaces and I traveled to participate in projects and residencies in Germany, the UK and the USA. In the mid 1990’s, a gallery that had seen a documentary film in which I was featured approached me for a show in the UK.

For the past 30 years, El Anatsui has been known within Africa as one of the continent’s most influential sculptors and today he is now also recognized as one of the foremost contemporary artists of his generation.

Description of his work

Up to 20 assistants help Anatsui flatten aluminum seals taken from thousands of liquor bottles. They then fold them into strips that are woven together with copper wire, resulting in draping cloth-like pieces that often reach sizes of 30 feet or more. Anatsui’s sculptures not only transform common materials and impart new meaning to them, they also continuously evolve undergoing transformations themselves each time they are shown.

El Anatsui was born in 1944 in Anyako, Ghana. He earned a Bachelor’s Degree in Sculpture and a Postgraduate Diploma in Art Education from the University of Science and Technology, Kumasi, Ghana. Much of Anatsui’s early work made use of scorching wood with fire. Before venturing into his current “cloth series” he worked with the concept of fragility through ceramics and created sculptures with a chainsaw and wood.

Many major institutions throughout the world have exhibited Anatsui’s work. He received an honorable mention at the 44th Venice Biennale. In 2007 El Anatsui exhibited at the 52nd Venice Biennale with a site-specific installation, transforming one of Venice’s most celebrated Gothic landmarks by wrapping the façade of the Palazzo Fortuny in a vast metal cloth.

Works by Anatsui can be seen in the permanent collections of The Metropolitan Museum of Art, NY; The Museum of Modern Art, NY; National Museum of African Art, Smithsonian Institution, Washington DC; The British Museum, London and the Pompidou Center, Paris, France, as well as many other institutions.

Anatsui lives and works in Nigeria where he is a Professor of Sculpture at the University of Nigeria, Nsukka. October Gallery, London and David Krut Fine Art, New York represents El Anatsui. This is an extract from Art Interview’s talk with El Anatsui: 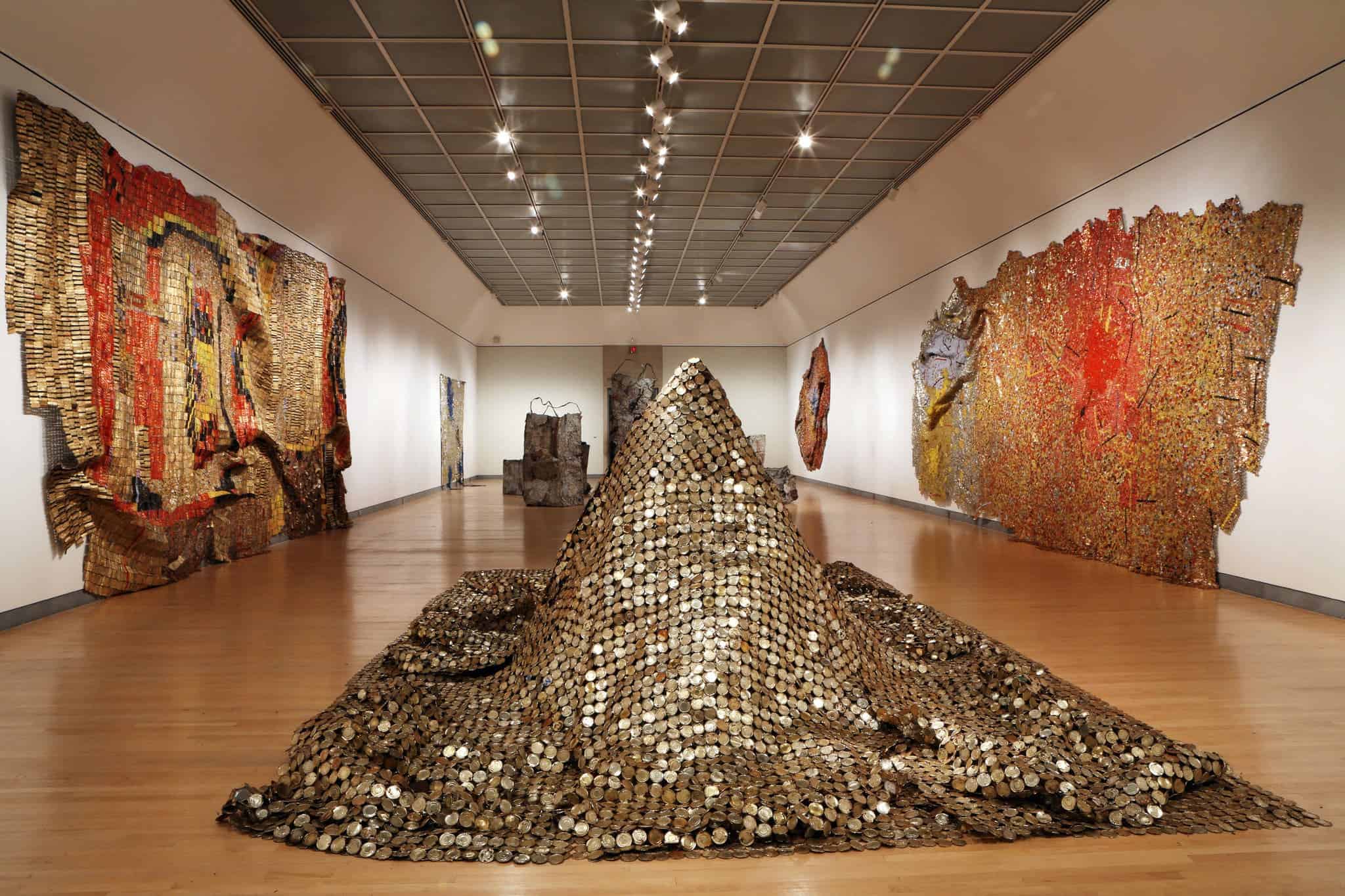