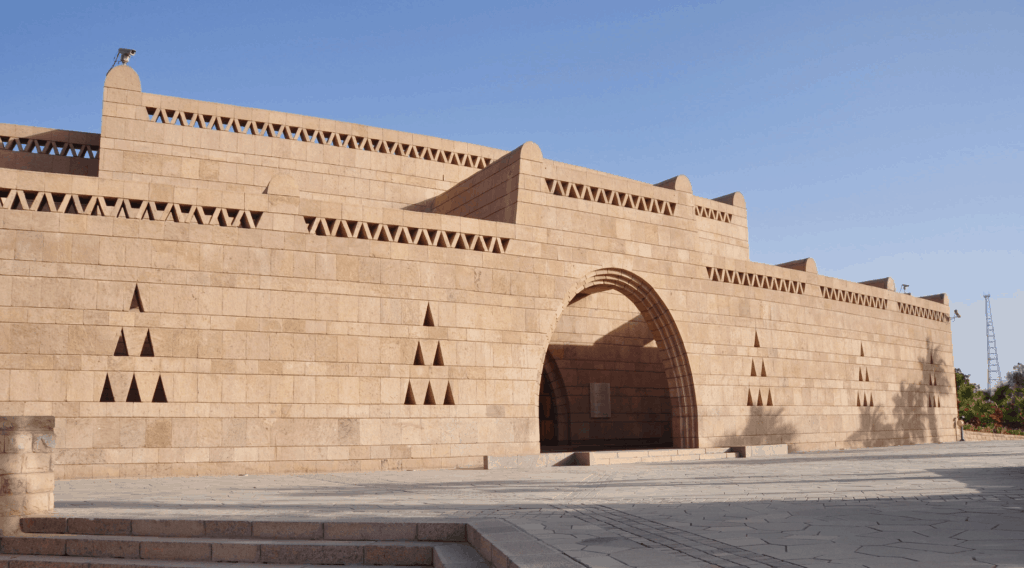 The Nubian Museum (officially the International Museum of Nubia) is an archaeological museum located in Aswan, Upper Egypt. It was built to a design by architect Mahmoud El-Hakim for an estimated construction cost of LE 75 million (approximately $22 million at the time). Dedicated to Nubian culture and civilization, it was inaugurated on November 23, 1997, and was awarded the Aga Khan Award for Architecture in 2001.
The Nubian Museum covers an area of 50,000 square meters, 7,000 of which are devoted to the building, while the rest are devoted to gardens and other public spaces. The building has three floors for displaying and housing, in addition to a library and information center. The largest part of the museum is occupied by the monumental pieces, reflecting phases of the development of Nubian culture and civilization.
Three thousand pieces of Egyptian antiquities, representing various ages; Geological, Pharaonic, Roman, Coptic and Islamic, were registered. The open-door exhibition includes 90 rare monumental pieces, while the internal halls contain 50 invaluable pieces dating back to pre-historic times, 503 pieces belong to the Pharaonic period, 52 to the Coptic era, 103 to the Islamic age, 140 to the Nubian era, in addition to 360 pieces reflecting the history of Aswan.
The Museum is built on a steep cliff, which enables it to embody a full scale design for the Nile river from its origins in Ethiopia and Sudan to Egypt. The edifice is surrounded by a Natural Botanical Garden, which contains a large variety of Egyptian flora.