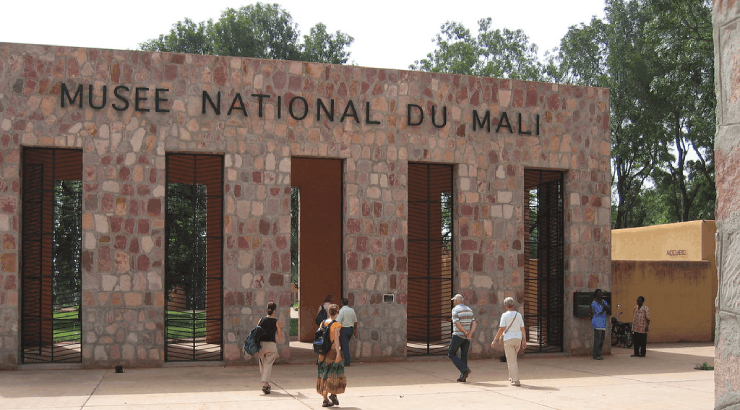 The National Museum of Malí (French: Musée national du Mali) is an archaeological and anthropological museum of African art is located in Bamako, the capital of Mali. It presents permanent and temporary exhibits on the history of Mali, as well as the musical instruments, dress, and ritual objects associated with Mali's various ethnic groups. Concrete models of several important cultural landmarks, such as the mosques of Djenné and Timbuktu are displayed outside on the grounds of the museum.

The Museum of African Art began under French colonial rule as the Sudanese Museum, part of the Institut Français d’Afrique Noire (IFAN) under Théodore Monod. It was opened on February 14, 1953, under the direction of Ukrainian archaeologist Y. Shumowskyi. Archaeologist Y. Shumovskyi had worked in the museum for nine years, gathering a significant portion (nearly 3000) of the holdings.

With the independence of the Republic of Mali in 1960, the Sudanese Museum became the Museum, with the new objectives of promoting national unity and celebrating Malian traditional culture. However, lack of financial means and absence of qualified personnel caused some deterioration in the museum's collections.

On March 30, 1956, the National Museum of African Art moved into a new cemented structure, created by architect Jean-Loup Pivin from traditional Malian designs. Since the 1996 election of former archaeologist Alpha Oumar Konaré to Mali's presidency, the museum's funding has increased considerably, leaving it among the best in West Africa.