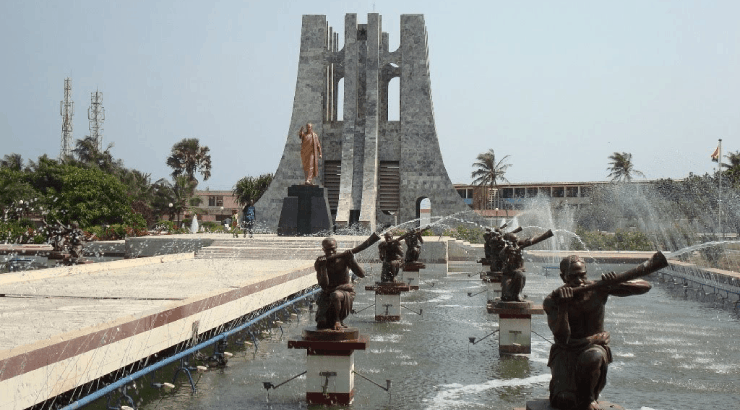 The Kwame Nkrumah Memorial Park & Mausoleum and memorial park is located in downtown Accra, the capital of Ghana. It is dedicated to the prominent Ghanaian leader Kwame Nkrumah. The memorial complex was dedicated in 1992, and is situated on the site of the former British colonial polo grounds in Accra. The Kwame Nkrumah Memorial Park & mausoleum, designed by Don Arthur, houses the bodies of Kwame Nkrumah and his wife Fathia Nkrumah. The building is meant to represent an upside down sword, which in Akan culture is a symbol of peace. The African mausoleum is clad from top to bottom with Italian marble, with a black star at its apex to symbolize unity. The interior boasts marble flooring and a mini mastaba looking marble grave marker, surrounded by river-washed rocks. A skylight at the top in the mausoleum illuminates the grave.The African mausoleum is surrounded by water, a symbol of life.

Kwame Nkrumah PC (21 September 1909[a] – 27 April 1972) was a Ghanaian politician and revolutionary. He was the first Prime Minister and President of Ghana, having led the Gold Coast to independence from Britain in 1957. An influential advocate of pan-Africanism, Nkrumah was a founding member of the Organisation of African Unity and winner of the Lenin Peace Prize in 1962. After twelve years abroad pursuing higher education, developing his political philosophy and organising with other diasporic pan-Africanists, Nkrumah returned to the Gold Coast to begin his political career as an advocate of national independence. He formed the Convention People's Party, which achieved rapid success through its unprecedented appeal to the common voter. He became Prime Minister in 1952 and retained this position when Ghana declared independence from Britain in 1957. In 1960, Ghanaians approved a new constitution and elected Nkrumah President.