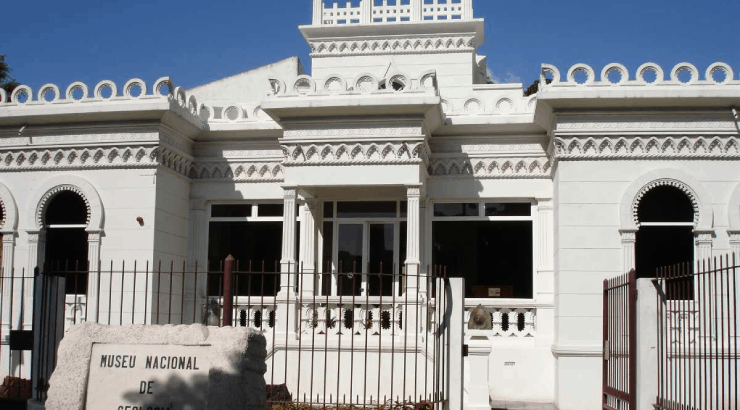 Museum of Geology Maputo is  is located at 24 de Julho Avenue and was known as Freire de Andrade Geological Museum. It was founded in 1940 and began as a synagogue. Manueline style houses two sections, Geology and Industry, each with several sub-sections.
In the geological division contains a collection of mineralogy (where there is a section of precious stones) another stratigraphic (rocks grouped by geological ages of the various formations) and one of economic minerals of the Province. The National Museum of Geology served as Department of the National Geological Direction and inherited the heritage of the extinct Museum Freire de Andrade, founded in 1940 (colonial time).

In 2001, now the African Art museum function has emerged with the aim of showing the country’s mineral wealth. This museum bears a history of approximately a century.
There are still numerous fossils from the marine formations and the Fernão Veloso Peninsula and other parts of the province.

The trip inside the African Art museum begins in Room 1, where you will find the exhibition of the development of Earth History and some fossils of Mozambique. Already in Room 2 stands out a relief sketch of the geology of Mozambique, which allows to know the areas rich in mineral resources, and still in this space it is possible to observe a copy of Rubelite with 50 cm height, considered the largest crystal in the world extracted in 1956 in the exploration of rare metal pegmatites in Zambezia province. It is noted that part of this crystal is exhibited at the Smithonian Museum in the United States of America. Room 3 has five subdivisions, namely A, B, C, D and E. Room 3A presents the macros and microscopic characteristics of some rocks in the country. In Room 3B, several examples of crystal geology can be observed, presenting didactic models that allow an easy understanding. Still in the same spot you can see a 45 cm tall, smoky and milky copy of Siamese cat, collected in Muiane, Zambezia, in 1963. Room 3C treats the color of minerals as an identification property, and 3D is reserved for temporary exhibitions only and operates a shop where visitors can buy souvenirs. And finally, Room 3E is a dark compartment illuminated by an ultraviolet lamp that allows you to view the radioactivity of rare minerals such as Niobium, Tantalum, Molybdenum, Zircon, Uranium, Antonite and Fluorite. In Room 4, there is an exhibition of the Mozambican mineral collection, hardness and density scales, and a panel on natural gas and oil. One can find a gold nugget extracted from Manica, sample of Tete and Niassa native gold. In the same room, there are also some examples of Flogopite, Mascovite, Tourmalines of different colors and unique in Mozambique. In Room 5 are exposed exploitable rocks and minerals, considered as raw materials for various industrial purposes. You can also see a showcase in the center of the room with jewels made from gemstones and semi-precious stones from Mozambique, such as Morganite, Aquamarines, Tourmaline, Emeralds, Quartz, Amethyst, Topaz and Zircons. The number of visitors varies from 90 to 896 per month. Last year alone, about 46180 people, mostly students and foreigners, visited the National Geology Museum. Most of the audience is female.