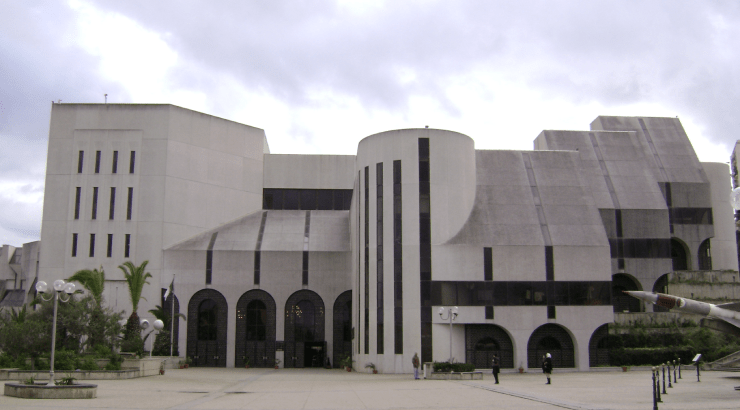 The Musem de l'Armee Algiers is located near the famous monument of the capital Makam El Chahid (Monument of Martyrs), in the municipality of El Madania in the wilaya of Algiers.

The collections of Musem de l'Armee Algiers :
The African Art museum displays various objects, clothing, weapons and other unique African Art pieces that belonged to the Algerian fighters of the Numidian era through the colonization to the present day. Exceptional items include a Napoleon III sword offered to Emir Abdelkader, the guillotine of Serkadji prison and personal belongings of Ali la Pointe. El Madania is a municipality in Algiers Province, Algeria. It is administratively part of Sidi M'Hamed district. Its municipal code is 1603 and postal code is 16075. It has a population of 51,404 as of the 1998 census, which gives it 15 seats in the PMA.

Opening hours
This African Art museum is open every day (except Fridays) from 10h to 18h (in summer, 19h).

The military of Algeria consists of the People's National Army (ANP), the Algerian National Navy (MRA), and the Algerian Air Force (QJJ), plus the Territorial Air Defence Forces. It is the direct successor of the National Liberation Army (Armée de Libération Nationale or ALN), the armed wing of the nationalist National Liberation Front which fought French colonial occupation during the Algerian War of Independence (1954–62). Total military personnel include 147,000 active, 150,000 reserve, and 187,000 paramilitary staff (2008 estimate).[92] Service in the military is compulsory for men aged 19–30, for a total of 12 months. The military expenditure was 4.3% of the gross domestic product (GDP) in 2012. Algeria has the second largest military in North Africa with the largest defence budget in Africa ($10 billion). In 2007, the Algerian Air Force signed a deal with Russia to purchase 49 MiG-29SMT and 6 MiG-29UBT at an estimated cost of $1.9 billion. Russia is also building two 636-type diesel submarines for Algeria.