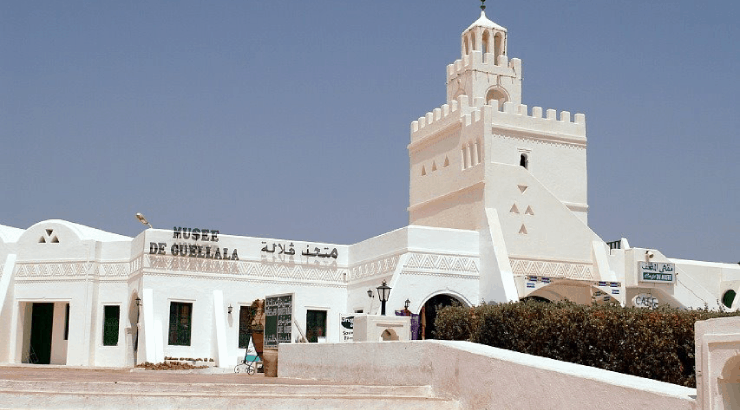 The Musee de Guellala is a museum of African Modern Art located on the island of Djerba in Tunisia . It was in 1991 that the idea of ​​the creation of a museum dedicated to the Tunisian heritage and especially Djerbian in all its diversity germinated. In 1997 , work began, and the March 15 , 2001, Guellela's museum of African Modern Art is finally ready to receive its first visitor, April 15 is the inauguration.

Its surface is of two hectares, of which 4000 m² covered. From the outside the museum is represented by an architecture that brings together: cupolas, minarets, traditional houses, all in white and green . The museum of Guellela of African Modern Art is a museum of popular traditional arts of Djerba, it is located on a hill (Tassida 52 m) which is the highest point of the island.

The Musee de Guellala of African Modern Art exhibits collections of objects and several scenes, it is composed of several blocks, each block has its nomination and presents a different theme; feast (wedding and all the preparation of the ceremony) traditions and customs, myths and legends, pottery and mosaic , traditional music .

Inside the Museum of African Modern Art, more than forty scenes are represented, which include: