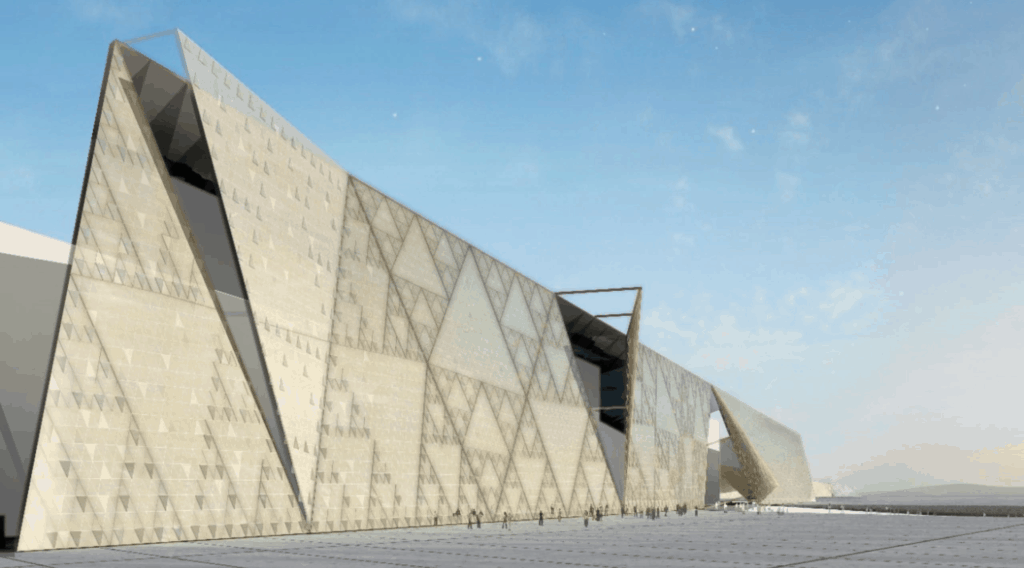 The Grand Egyptian Museum Giza (GEM), also known as the Giza Museum, is a planned museum of artifacts of ancient Egypt. Described as the largest archaeological museum in the world, the museum is under construction and is scheduled to open in 2020, exhibiting the full Tutankhamun collection with many pieces to be displayed for the first time. The museum is sited on 50 hectares (120 acres) of land approximately two kilometers from the Giza pyramids and is part of a new master plan for the plateau.
The design of the building was decided by means of an architectural competition.The competition was announced on 7 January 2002. The organisers received 1557 entries from 82 countries, making it the second largest architectural competition in history. In the second stage of the competition, 20 entries were asked to submit additional information. Judging was complete by 2 June 2003. The competition was won by the company Heneghan Peng from Dublin, Ireland, winning 250,000 dollars. Second place was awarded to Coop Himmelblau. Héctor Vigliecca and Luciene Quel (Brazil), Ruben Verdi (Italy), Michael Zimmermann, Engel und Zimmermann (Germany), Fernando Pardo Calvo y Bernardo Garcia Tapia, Nuno Filipe Morais Monteiro (Portugal) and Martin Roubik (Czech Republic) received Honorable Mention. The building is designed by Heneghan Peng Architects, Buro Happold and Arup. The exhibition masterplan, exhibition design and museology is by Metaphor and Cultural Innovations Ltd.

The building is shaped like a chamfered triangle in plan. It sits on a site two kilometers west of the pyramids, near a motorway interchange. The building's north and south walls line up directly with the Great Pyramid of Khufu and the Pyramid of Menkaure. In front of the building is a large plaza, filled with date plants. One of the main features of the museum is the translucent stone wall, made of alabaster, that makes up the front facade of the building. Inside the main entrance is a large atrium, where large statues will be exhibited.

On 2 February 2010, Hill International announced that Egypt's Ministry of Culture had signed a contract with a joint venture of Hill and EHAF Consulting Engineers to provide project management services during the design and construction of the Grand Egyptian Museum.

The total estimated project cost is US$550m, US$300m of which will be financed from Japanese loans, the remaining will be financed by the Supreme Council of Antiquities, other donations and international funds.

The new museum is designed to include the latest technology, including virtual reality. The museum will also be an international center of communication between museums, to promote direct contact with other local and international museums. The Grand Egyptian Museum will include a children's museum, conference center, training center, and workshops similar to the old Pharaonic places.
The exhibition will cover about one third of the total museum grounds displaying 50,000 artefacts. The main attraction will be the first exhibition of the full tomb collection of King Tutankhamun. The collection includes about 5000 items in total and will be relocated from the Egyptian Museum in Cairo. Other objects will be relocated from storages and museums in Luxor, Minya, Sohag, Assiut, Beni Suef, Fayoum, the Delta, and Alexandria.