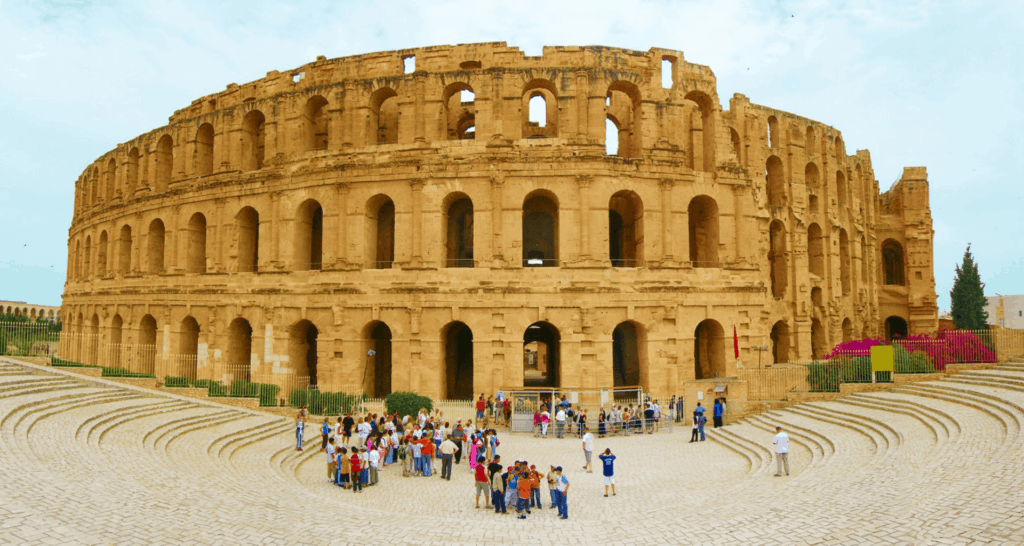 El Jem Archaeological Museum is famous all over Tunisia for its spectacular amphitheater, a UNESCO world heritage site and for the El Jem Museum of Archaeology, home to many wonders. El Jem is home to the third largest amphitheater left in the world after the one in Rome and the one in Capoue, and it’s also Tunisia most significant ruin from the Roman Empire.

Located between Sousse and Sfax, El Jem is in the heart of Tunisia olives region.  Now a small town, El Jem used to be one of Tunisia wealthiest cities during the Roman Empire era, then called Thysdrus. In this arid region, getting water can be hard, the Romans built the amphitheater so it could also be used as a cistern, collecting the rainwater and distributing it through an intricate pipe system.

The amphitheater was built at the beginning of the third century, and it led the inhabitants of El Jem to their doom. Showing so much wealth attracted Rome and the emperor who decided to increase the taxes on the province. In 228 AD, the landowners supported by the peasants started a revolt against Rome, killing the Roman procurator. The Emperor Maximin responded by sending troops to destroy the city.

El Jem amphitheater is unique, built in an elliptic shape using golden sandstone, the architects mostly used the Corinthian architectural style. You might notice Punic influences (in the proportions) and African (no bricks where used). It’s the only building, with the Coliseum in Rome, to have three levels of galleries. It could host up to 30 000 spectators; located in a critical crossroad, many merchants passed through the busy city of El Jem.

It’s the last great structure built during the Roman Empire Era. The architects took inspiration from the Coliseum in Rome but, being built 150 years later, the amphitheater benefited from several innovations such as the water system and the way the underground was made: backstage, with a central hallway, lined up with 16 cells for animals and gladiators.