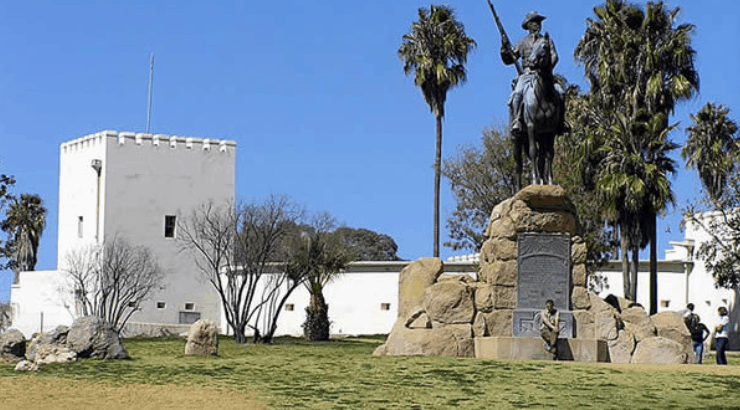 The Alte Feste (Old Fortress) is a fortress and museum in downtown Windhoek, the capital of Namibia.

The building was designed by captain Curt von François to serve as headquarters of the imperial German Schutztruppe (colonial military force) during German colonization of South West Africa. The location of Windhoek, which was deserted and completely destroyed at that time, was chosen because the Germans felt it would serve as a buffer zone between the Nama and Herero tribes. The fort was, however, never involved in any military action.

The foundation was laid on 18 October 1890 by then Schutztruppe private Gustav Tünschel. The building was redesigned multiple times during the first years; its final layout was only completed in 1915. It consists of an inner courtyard with high walls and accommodation for the troops on the inside, as well as four towers. Alte Feste is the oldest surviving building in the city which subsequently developed around it.

In 1935 the fort was used for a more peaceful purpose when it was converted into a hostel for the adjacent Windhoek High School. Already severely dilapidated, it was declared a National Monument in 1957. The building was renovated extensively in 1963, and since then accommodates the National Museum of African Modern Art of Namibia.

In 2010, the Reiterdenkmal, Windhoek's well-known equestrian monument, was placed in front of Alte Feste. It was removed and placed in storage on Christmas Day in 2013.