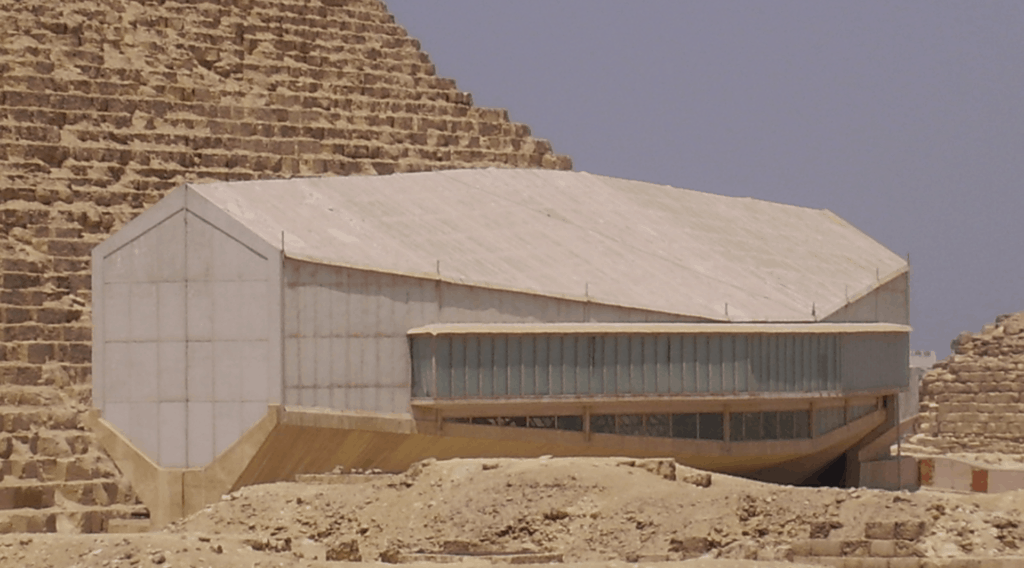 The Musee de la Barque Solaire is located in Egypt. It was constructed around 1985 and is dedicated to display the reconstructed Khufu solar ship. When the Egyptian antiquities inspector responsible for the area of Giza, Mohamed Zaky Nour, the civil engineer who was in charge of cleaning up the area of the Pyramids of Giza, Kamal el Malakh, and the supervisor of the cleaning process of the area, Doctor Abdel Men'em Aboubakr were finishing their work at the pyramids, they found out what seemed to be a wall made out of limestone. After a lot of digging in the ground, they reached the bottom of the wall and found 42 pieces of rock that were divided into two groups to protect them against any outer dangers or harm. On the 26th of May 1954, the nozzle of the hole where the pieces of the solar boat were opened and everybody who was there smelled the distinctive scent of the cedar wood. The museum lies just a few meters from where it was found on the southern side of the pyramid. It was constructed next to the Great Pyramid of Khufu. The Musee de la Barque Solaire is equipped with modern techniques and technologies in order to preserve the solar boat.

Contents of Collection
Reassembled Khufu ship (The ship was fully re-assembled in 1968) (The ship was disassembled around the funeral rites into 1224 small pieces before being buried near the pyramids in the boat pit). The museum is constructed so as to enable viewing the boat from three different levels in three floors. In the ground floor, one can view the bottom of the boat.
A maquette Khufu Solar ship.
Photos of the discovery & reassembling of the ship.