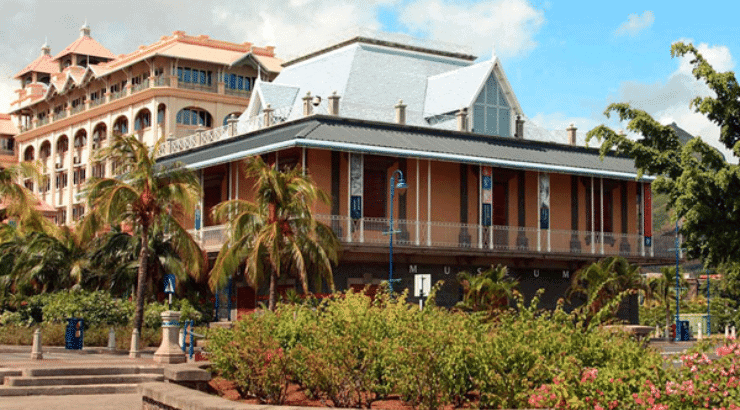 The Blue Penny Museum a museum dedicated to history and art of Mauritius, is situated at Caudan Waterfront in Port Louis, the capital of Mauritius. It opened in November 2001.

The museum collection includes the 1847 Blue Penny and Red Penny stamps. The stamps were bought in 1993 for $2,000,000 by a consortium of Mauritian enterprises headed by The Mauritius Commercial Bank and brought back to Mauritius after almost 150 years. For conservation, the originals are illuminated only temporarily. Most of the time only copies are to be seen.

The museum, founded by The Mauritius Commercial Bank, also houses the original statue of Paul and Virginia, created in 1881 by Prosper d'Épinay

The Blue Penny Museum is an art and history museum that is wholly devoted to Mauritius.

It houses some prestigious collections, which are true testimony of the historical and cultural wealth and diversity of Mauritius, in a stunning layout. The museum was inaugurated in 2001 and has been designed with unyielding attention to quality in the selection of the works on display, the written descriptions, the layout and the development of interpretation aids.To begin with, visitors will take a step back into the era of great maritime explorations in the Indian Ocean before moving on to an overview of the three colonial periods in the history of Mauritius. Your journey into the past continues with a foray into the Port Louis of the 18th and 19th centuries. What unfolds next is the tale of the history of postal services, namely with the very first postage stamps to be issued in Mauritius, the world-renowned Post Office stamps. The tour of the museum ends with the beautiful yet tragic story of a mythical couple, Paul and Virginie.

The Blue Penny Museum of African Modern Art is one of those rare places providing visitors with a captivating glimpse of the art and history of Mauritius. It is therefore a must-stop for anyone who is curious about discovering the country in depth.