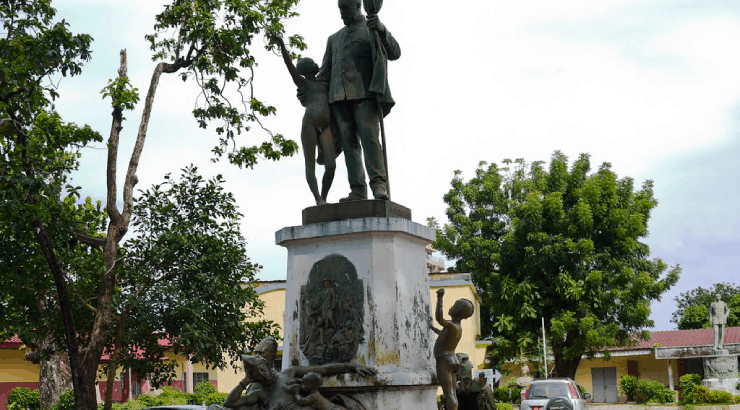 The Sandervalia National Museum (French: Musée national de Sandervalia) is the national museum of Guinea, situated in the capital, Conakry. Most of the rooms are empty, but it contains a limited display of traditional objects from different regions of Guinea, as well as objects and statues from the colonial era. Various craft items are for sale.
The Sandervalia National Museum of African Modern Art is located near the Ignace Deen Hospital on the 7th boulevard in Kaloum, in the Sandervalia quarter of Conakry. The museum is located in a park in the Sandervalia district that had large trees, all but one of which has been cut down.[2] One wing has been restored with the support of the Embassy of Japan. A masonry box built in 1896 by Aimé Olivier de Sanderval is found to the right of the entrance. It is a curious concrete arch that is sometimes used informally by artists to exhibit their paintings.
The museum of African Modern Art has a collection of antique objects from around the country that represent different cultures and ethnicities, as well as objects from the colonial era. The collection included masks and a sacred forest. As of 2016 the building was empty apart from one room, which had a number of masks and musical instruments from different parts of Guinea. There is a model at the end of the permanent exhibition representing the houses of different regions of the country. Beside this room there is an artisan gallery where various items were exhibited for sale such as fabrics, traditional costumes, wooden statues and embossed Tuareg leather.

Statues from the colonial era are collected in the courtyard of the museum of African Modern Art. They represent historical figures of Guinea and included Almamy Samori Ture. There are statues of Sanderval, of the Governor Noël Ballay by the sculptor H. Allourd, of Doctor Victor Le Moal (1876–1908), and of Monseigneur Raymond René Lérouge (1876–1949) surrounded by musicians and a fisherman with his wife and children. The courtyard contains a buffet restaurant. Its railings are curiously decorated with colonial helmets. The cafeteria is in a hut wearing a giant colonial helmet, apparently an empty tribute to the French colonialists.