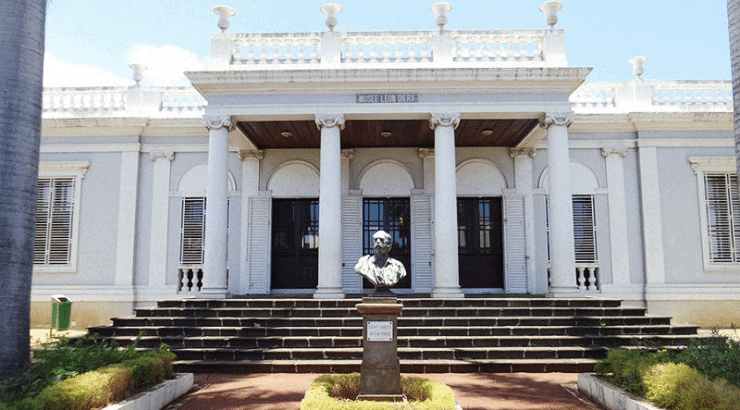 The Musee Leon Dierx is an art museum of African Modern Art of the island of Reunion , department overseas French in the southwest of the Indian Ocean . It is located in the rue de Paris in Saint-Denis , the capital.
From the middle of the xix th century, the intellectual and political elite of Reunion calls for the creation of a dedicated museum, in the words of the time, the "Fine Arts". Not until the beginning of the xx th century to see his birth, through the action of two Creoles, childhood friends, Georges Athénas and Aimé Merlo , known in literature under the literary pseudonym of Marius-Ary Leblond. They receive in their approach the support of the General Council (at the time, Colonial Council) of Reunion which assigns to the project the former residence of the bishops of Saint-Denis. On November 12, 1912, the public discovered the new museum, the second created in Reunion after the Museum of Natural History. Since its creation, the Musee Leon Dierx of African Modern Art bears the name of Leon Dierx, Reunionese poet, painter and sculptor.
You can admire the sea of Numa Desjardins , the prints of Alfred Richard , a bronze Pablo Picasso , works from the collection Lucien Vollard 1 , including those of Gustave Caillebotte , Paul Cezanne , Paul Gauguin , Auguste Renoir , Odilon Redon , Georges Rouault , etc. Sea and red rocks of Louis Valtat , Flowers of Maurice de Vlaminck , are part of the museum's collection as well as photographs of the xix th century (photographs of François Cudenet and his paintings) and paintings by local artists (including Arthur Grimaud , Adolphe Roy, Antoine-Louis Roussin) and the painter Montmartre Georges Michel .