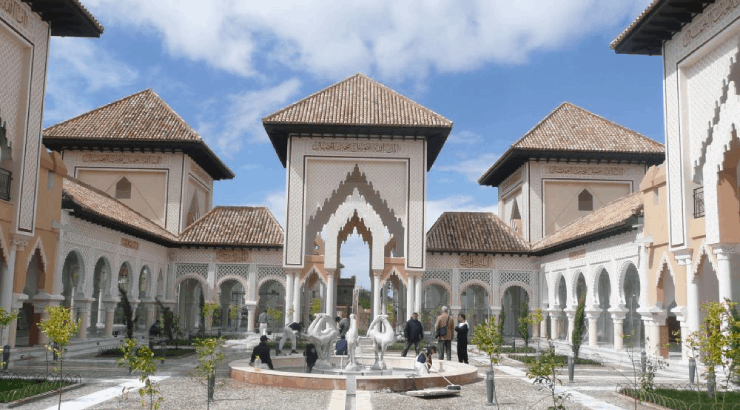 Centre des Etudes Andalouses Tlemcen is an architectural jewel of Andalusian Moorish art. The architectural, typically Andalusian, revolves around thematic patios, according to the functions of each party as it is the case for the educational part, called "patio of knowledge". All these small patios overlook a large patio called "patio gazelles" where a large jet of water made with gazelles all around. Its essential function is to promote research in Andalusian civilization and to encourage researchers to study different facets of Andalusian art and culture such as decoration, poetry, literature, philosophy and other ..

The realization of the Centre des Etudes Andalouses African Art project benefited from an envelope of 650 million dinars. Extending over an area of ​​10,000 m2. The center has a library, a media library, laboratories and conference rooms, in addition to research, the center will also host scientific meetings. In the field of research, thanks to state-of-the-art equipment, it will allow academics to conduct real studies on various prehistoric sites in the city and region such as Beni Snous, Nedroma, Ouled Mimoun, etc. The study projects will cover different areas of the human and social sciences, including archeology, prehistory, historical and religious sciences, philosophy and linguistics. The African Art  center also aims to provide academics with the necessary means to contribute to the training of young researchers, to initiate and animate scientific exchanges between different research centers of world universities. The center is attached to the National Center for Research in Prehistory Anthropology and History (CNRPAH) of Algiers. The center was completed in March 2011.