Bright Tetteh Ackwerh is a Ghanaian satirical artist who employs the domains of popular art, street art, painting, and illustration to voice and document his persuasions. He has exhibited widely in Ghana and West Africa, building niche as an emerging contemporary Ghanaian artist on the West African art scene. 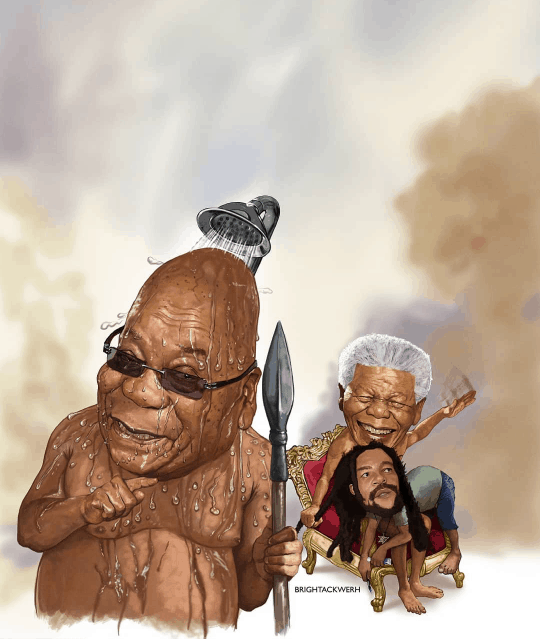 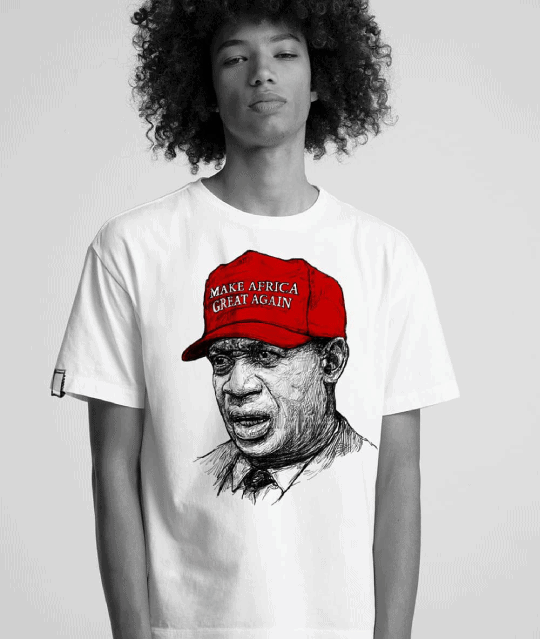 Tell us about Tweaa Room: Confrontation; the piece that has eventually landed you the 2016 prestigious Kuenyehia Prize for Contemporary Ghanaian Art prize.

Tweaa Room: Confrontation was one of my favourite pieces to work on because of the challenge the project posed and what we had initially planned to do with it. A lot of my work is inspired by popular culture and popular cultural production in Ghana.
It was part of a larger series of illustrations I called which touched on some pertinent issues happening in Ghana. It also became part of a project called ‘curated by Wanlov the Kuborlor. This project featured music and visuals in a single body of work existing on the internet (SoundCloud and other social media platforms) speaking to dumsor [rationing of electricity] and corruption in Ghana.
The painting features caricatures of some popular musicians who contributed to the project barging into a room labelled the Tweaa Room to question what they thought was indecisive actions to solve problems they were facing. The project sought to use creative arts to question the powers that be about seemingly unquestionable decisions.

There is a goat in the piece which appears to be lying dead. What does that symbolize?

The dead goat symbolises a very Ghanaian attitude which perhaps is epitomised by the first gentleman of the land. On a visit to Botswana last year the president said he had the dead goat syndrome.
We had dumsor, corruption and economic hardships and the man we have employed to solve this (because he said he could and would) was telling us our cries were falling on deaf ears.
But I think this character cuts across to Ghanaian as a whole; because the leadership is a reflection of the people. And we all sometimes turn deaf ears to pertinent issues we can and should address such as littering and sanitation. So the goat epitomizes every single Ghanaian who turns a blind eye to what they should be
focusing on to help build a better Ghana. 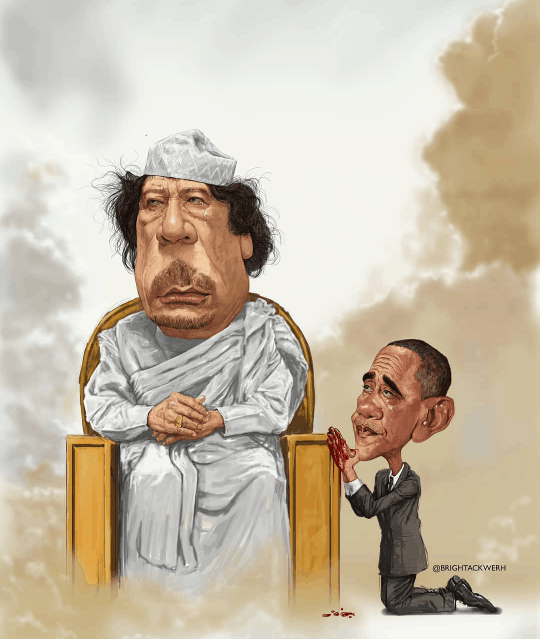 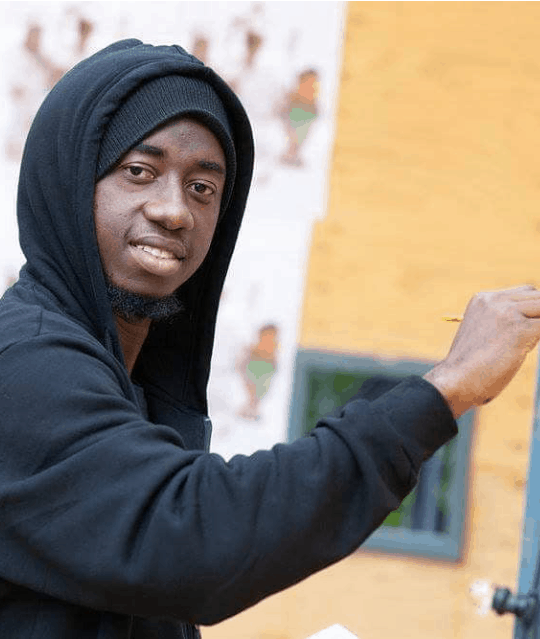 What does a prize like Kuenyehia do to the promotion of art in the country?

Grants and award schemes like the Kuenyehia Prize for Contemporary Ghanaian art serve as great promotion and source of encouragement to deserving artists. In a country where very little is released to or reaches the actual artists from the government coffers you can’t over emphasize what this is doing to me right now.

As an artist, how do you think arts can be taught and promoted in the country?

So far a lot of group and independent shows have sprung up all over the country and especially in the capital; we have been setting the pace and introducing new insights and emerging talents to the art space and beyond.
A lot more of such shows should be held and encouraged with more logistics. There is already a lot of world class talent and content right from here so it’s a matter of putting structures in place for such works to be experienced and for the creative minds to be able to make significant gains from it.

Do you like to be described as a caricaturist or simply as an artist?

In the context of contemporary art there is very little lines differentiating between hitherto clearly demarcated forms of expression. So humorous cartoons or illustrations could very much become art if the artist is aware of what a contemporary

art space demands. In the immaculate words of Karikacha Seidou of KNUST [where Bright attended university] in his emancipatory teaching modules: ‘every shit can become a hit’ provided there is no ‘s’ there to disturb it.

Now, let’s talk about your popularity online, how that affects your work and the controversial caricatures you post online.

Hahaha! I am not even that famous on social media. Of all my contemporaries, I may even have the least following and interactivity. My work in that space however could be what gets people talking. The kind of conversations they generate and the narratives they present are always very potent only masked with satire.
And I don’t think I’m even that controversial. It’s more like there is a fear of speaking up about sensitive topics which I also have but I don’t let it deter me from commenting anyway. I have had experiences where some of my work has been rejected by some exhibition spaces due to the sensitivity of their subjects but by doing that it only hinders artistic license and true creative spirit.
As such I am very happy the Kuenyehia Prize encourages these two crucial traits and so they honour the work in this manner. 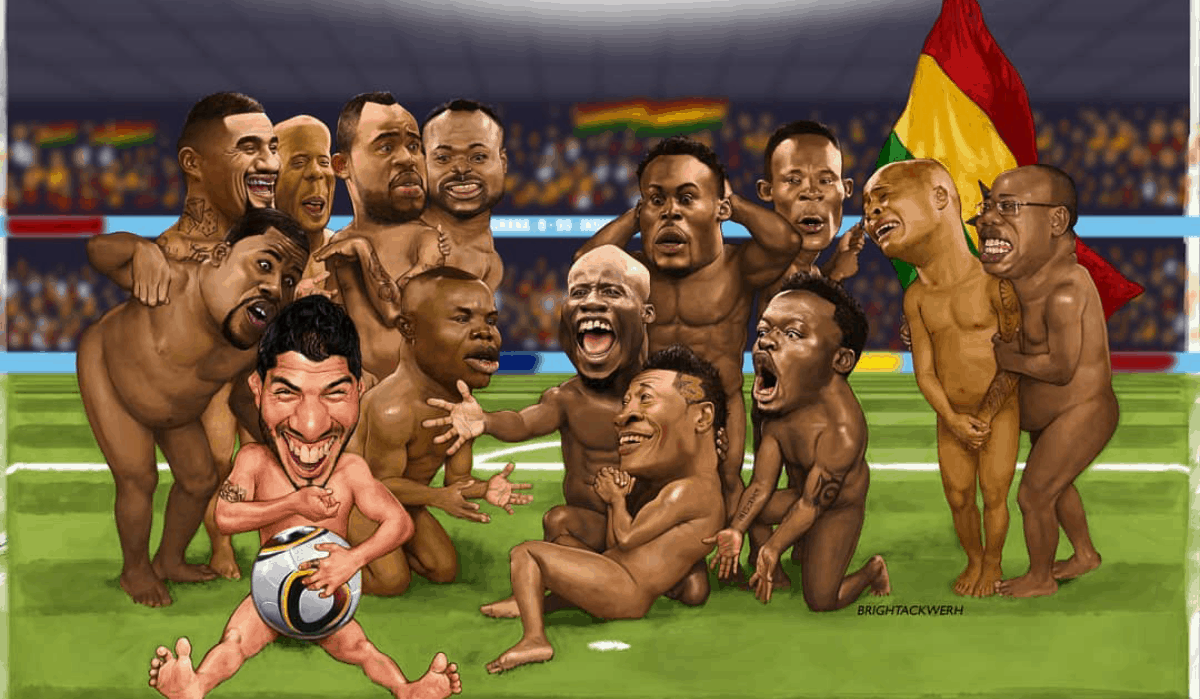 On the topic of social media, you have had some issues with plagiarism. Can you talk through that experience?

Plagiarism is a very real issue. In that it is all around us especially for artists like myself who use social media to share their work. There is always the possibility of people downloading copies of your work and altering them for their own promotional activities.
I have previously had my work published in a newspaper without due permission and I have also had people sign their signatures over my work in a bid to claim authorship but some of these things I consider as street etiquette and so I just let them go.

20,000! Woah! I wasn’t expecting this when we did that project last year. I wonder how many people outside our little bohemian communities even paid attention to us but we did it anyway just for the passion. So to top it up with this recognition now and all the other opportunities the Kuenyehia Prize is giving is wonderful. I will pay my
tithes with it. Hahaha!

What next for Bright Ackwerh, the artist?

Bright Ackwerh is still working on his multiple projects. I actually left the event, went home to break the news to my parents and then it was straight to the studio. I am working on a bunch of new projects.
They are called “Validate me”, “Very graphic” and “Very very graphic” all extending and generating dialogue about cultural capital and identity politics in popular culture.
I will continue to share snippets of these on all my social media pages
(@brightackwerh) to build up some interest for when we do exhibitions or have the chance to speak about them to the media. 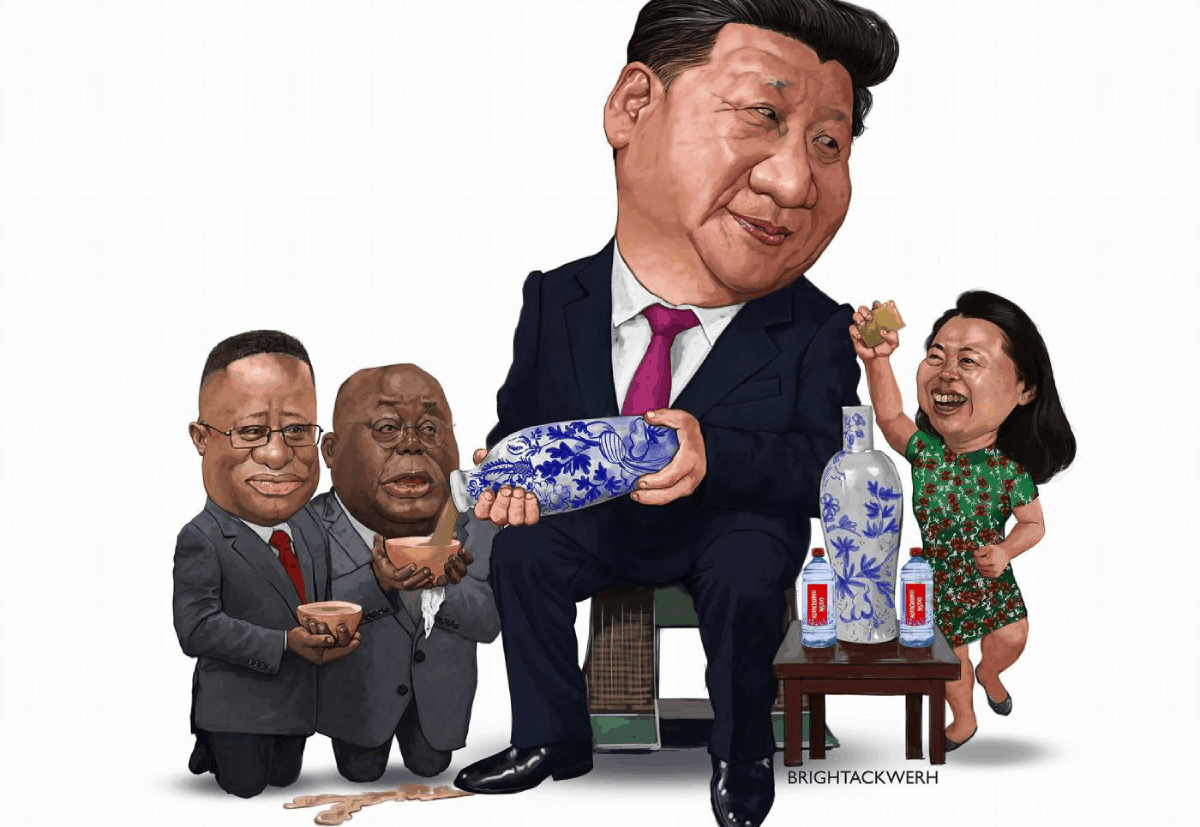