Born in 1971 in Ouagadougou, Hamed Ouattara first studied accountancy, then fashion before establishing himself as a self-taught painter. After training at the Olorun Foundation, he took a course as part of “Ouag’Art’96” and trained in design at “The National Higher School of Industrial Design” in Paris in 2003.

He has taken part in several collective and individual exhibitions in Ouagadougou and held exhibitions abroad in Brussels, Strasbourg, and Turin. Whether in his paintings or furnitures, the Hamed Ouattara style and touch can be felt. He is rigorous, organized, clear, precise and efficient. Reflected in his rounded style are his numerous trips abroad, his time spent with the “ENSCI”, and his extensive knowledge of design programs.
In 2014, Hamed Ouattara obtained the African Design Award and in 2017 he was elected Cultural Personality of the Year in Burkina Faso. . 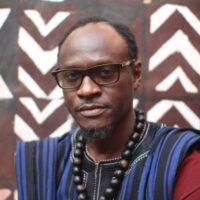 “Through recycling, I’m able to offer a truly local, innovative response to waste products made from scarce resources in our region”
Hamed Ouattara-Studio Hamed Ouattara

Hamed Ouattara‘s minimalist philosophy results in limited stamped edition pieces that have each been nurtured by his craftsmanship.  His core mission is to transform local, cast-off objects into a new concept of modern luxury African design. He and his companion craftsmen are committed to the success of social design, an alliance of culture and modernity. Working in a country where constant power outages are the norm, and equipment is difficult to procure, he uses theses challenges to his advantage. The hinges, nails and tools necessary for each piece are crafted in his studio, meaning that every detail is carefully considered and utterly bespoke in Studio Hamed Ouattara Ouagadougou.